A new world across the street 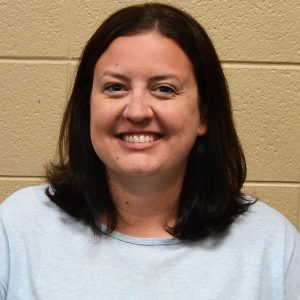 When Christina Schoenherr and her family moved from suburban Philadelphia to her mother-in-law’s hometown of Brownstown, Indiana, the New Jersey native knew she was moving far from the life she’d always known. Fortunately, she didn’t have to travel far to find a job.

Right across the street from her new home, Jackson County REMC was looking to replace a retiring customer service representative. The position would also take on the REMC’s first full-time human resources duties. Talk about serendipity: Christina held a master’s degree in HR. A neighbor, who also worked at the REMC, told Christina about it and suggested she apply.

“I was in Indiana only for a few months … I didn’t know what a cooperative was,” she said. “Everything kind of fell into place. I couldn’t have planned a better move: a job doing what I just got a master’s in literally next door to my house.”

There was a lot of acclimating, learning about cooperatives and the electric industry, she noted. But the small company aspect of the REMC was familiar to her, and she liked that. “Everybody here was so nice.”

Since she was the first on-staff HR person, the cooperative’s manager asked her to tell him what an HR person did. “They had an HR job description,” she said, “but when I started, it was kind of like, ‘OK, you’ve done this before, and we haven’t. So, what do we need?’

“I’ve been very fortunate to be the first person in this position because I have been able to tailor it to the needs of the cooperative and my strengths,” she added.

Christina just celebrated her 10th year at the cooperative. In those years she’s seen Jackson County REMC grow from 68 employees to now over 85. In addition, the cooperative added fiber internet services. Through the growth, Christina has maintained the same HR responsibilities, but the overall scope of her role has grown with the cooperative.

“A lot of times, when people think of the cooperative, they think of either customer service or linemen. And those are very important jobs here. But people forget that there is engineering and accounting and so much more. It is huge.”

She added that cooperatives are just good places to work for young people wanting to stay in their community. “They’re small, and they’re families, and you can get involved in almost whatever you want.” And being based in smaller communities, the office, as Christina found, can be right across the street.