Raising his hand to opportunities and growth 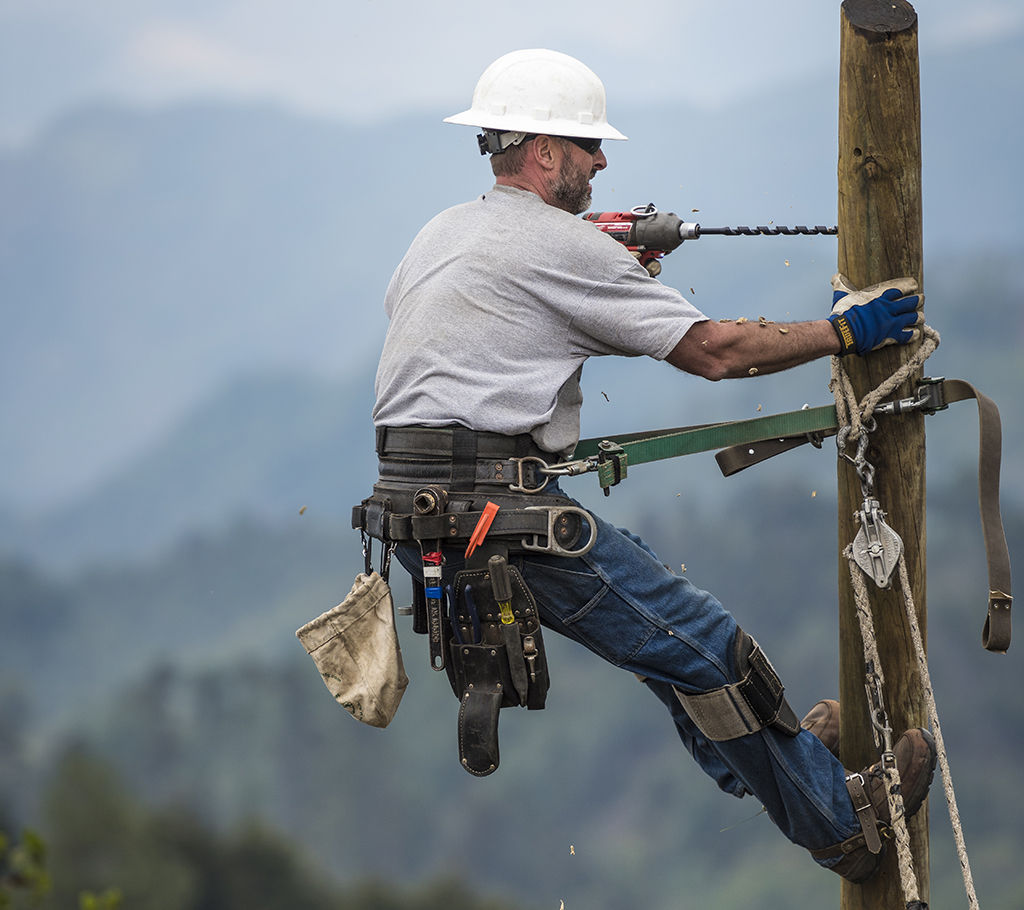 Jamie Bell, construction engineer at NineStar Connect, has scaled the loftiest heights any electric cooperative worker can go. In 2017, he stood, atop a pole with just metal climbing gaffs strapped on his calves and a leather harness around the pole and his waist, on a mountaintop and he looked down on clouds, valleys and distant mountains of Guatemala and Mexico. It was a long way from home for a guy who grew up in Greenfield wanting nothing more than to work for his local electric cooperative.

Since joining NineStar Connect (then Central Indiana Power) in 1993 as a groundman to assist the lineworkers, opportunities have always been knocking, and Bell has always answered the call.

Knowing people who worked at the cooperative and its reputation, Bell wanted to work for the electric cooperative after high school. With no jobs open at the time, he took a job with a local home builder. “I was basically waiting for an opening because, at that time, it was really tough to get onto a cooperative.”

He waited six years for the opportunity to become a lineman. However, those years proved invaluable throughout his nearly 30-year career at NineStar Connect. He has a wide-ranging knowledge of electrical wiring on both sides of a meter as well as construction engineering and design. After joining the cooperative, Bell became a journeyman lineman. He was also offered other opportunities that allowed him to put the full scope of his knowledge and skills to use. He was promoted to positions that allowed him to oversee larger projects.

Whether tackling a learning curve of new technology, or climbing a pole in Guatemalan mountains, Bell said, “I’m always up for a challenge to learn new things.”

Looking back to Guatemala, Bell volunteered for the Project Indiana trip as a lineworker. Project Indiana is the not-for-profit Indiana electric cooperative initiative to bring electricity to rural Guatemala. “It was a challenge just to get up to the pole. I knew going in that view would be there. So, I raised my hand and said, ‘Hey, I want to climb that pole.’”

Instead of taking in the view too much, Bell said he just focused on the task at hand to complete the project. “It was just one more task in front of me to tackle. There wasn’t much time to reflect or anything like that,” he said … at least at that moment in the air.

And on the next trip to Guatemala in 2019, Bell volunteered to help plan, coordinate and supervise the construction trip to village in eastern Guatemala. On that trip, he oversaw the inside wiring of the village huts, churches, school and other buildings. “It was just gratifying to see all the stages of planning, then the satisfaction of its completion.”

And whether it’s the consumers in his hometown in Central Indiana or villagers in Central America, that job satisfaction comes in knowing he’s helping people with essential services they use to lead fuller, healthier and happier lives.