Finding a home at the electric cooperative 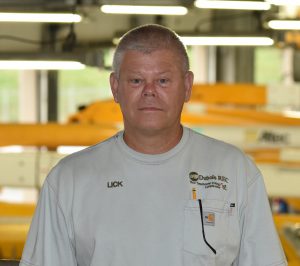 Patrick Lichlyter wasn’t sure what career he wanted to pursue after high school. But once he hired on as an apprentice lineman at an electric cooperative, he knew he never wanted to leave. And despite changing roles and duties three times since then, he’s still at the place he’s always wanted to be.

Today, the 60-year-old Lichlyter is manager of operations at Jasper-based Dubois REC. No longer working atop power poles with 7,200 volts of electricity, he makes it his top professional and personal duty to ensure the linemen under him get to go home at the end of every day.

“I feel that I’m responsible for those guys out there. When they walk in here in the morning until they leave, I will do whatever it takes to make sure these guys get their job done right, done safely, and get home to their families.”

Lichlyter said he loved the work as a lineman: being outdoors, working with a team of “such good guys,” and doing physical labor. But around 2007, when he was 46, he had his first bout with crippling back spasms that left him face-down in a trench one day. The sporadic problems continued for a few more years, coming out of the blue during seemingly small tasks, and he began to worry if he could continue doing the physically demanding lineman’s job. “I didn’t know if I could make it being a lineman the rest of my life,” he said. “But I wanted to retire here.”

In 2010, a position in the metering department opened at the cooperative, and Lichlyter saw an opportunity to stay with the place he loved without the physical stress on his back. In 2015, an energy advisory role was also added to his duties which gave him a chance to work with the electric cooperative’s consumers directly, solving problems and helping them with high electric bills.

But he missed the camaraderie and being with the special group of workers who literally keep the lights on. In 2017, the manager of operations position opened. Lichlyter wasn’t certain he was the person for that advanced position, but his CEO at the time and the linemen he once worked with all encouraged him to go for it. “Once a lineman, always a lineman,” he said. “This was my opportunity to get back with those guys and work with them again.”

No matter what the job is at the co-op, however, Lichlyter points out, every employee and job is valued. That’s what makes the co-op special. “Everybody is somebody here. Everybody cares about the people here, and cares about the consumers. It’s just a special atmosphere.”