A career, not a job 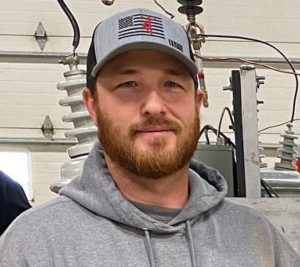 After high school and college, Pete Byrum, operations manager at Jay County REMC, worked a couple of jobs, but no job felt like a permanent “home” until he took a job just beyond his high school’s front doors at his hometown electric cooperative. It was a place his dad had encouraged him to look into since high school.

At age 28, Byrum came home to Portland, to Jay County REMC, in 2011. He left his previous bricklaying and asphalt jobs behind and took a position as a groundman — one who assists the journeymen linemen. As is often the case with newly hired groundmen, within the year Byrum began the four-year apprentice lineman program on his way to becoming a lineman himself.

Now at 40, Byrum is the REMC’s operations manager. He oversees six linemen and two apprentices plus a warehouse/purchasing manager and the staking technician. He reports directly to the CEO.

“Once I started here, I knew this was more than likely going to be the place I retire from,” he said. “I definitely love the rural feel, the way they interact with the members, and what all the REMCs are about. I like the kind of work we do, keeping people’s power on. We’ve got the best jobs in Jay County.”

Byrum went to college, he admitted, to play baseball. His degree in human resources was more of a bonus. But he was more interested in working outdoors, so when he was offered a job as a brick layer, he took it. Once he and his wife started a family, the need for better insurance and benefits led him to an asphalt company in Ohio. Not long after, his dad told him about an opening at the REMC.

Byrum said he enjoyed being a lineman. “Line work is not a job for everybody. But there’s a lot of pride in it. And the type of work — always working outside — just went along with what I like to do.”

In 2019, the metering department had an opening. He joined that department while maintaining line duties.

When the operations manager moved to another position at the REMC, Byrum applied and moved into that position. The transition, he said, was easy because of the people he works with. “We have a really great group of employees.”

His first jobs out of college were just that, he said, jobs. “This is a career, compared to a job.